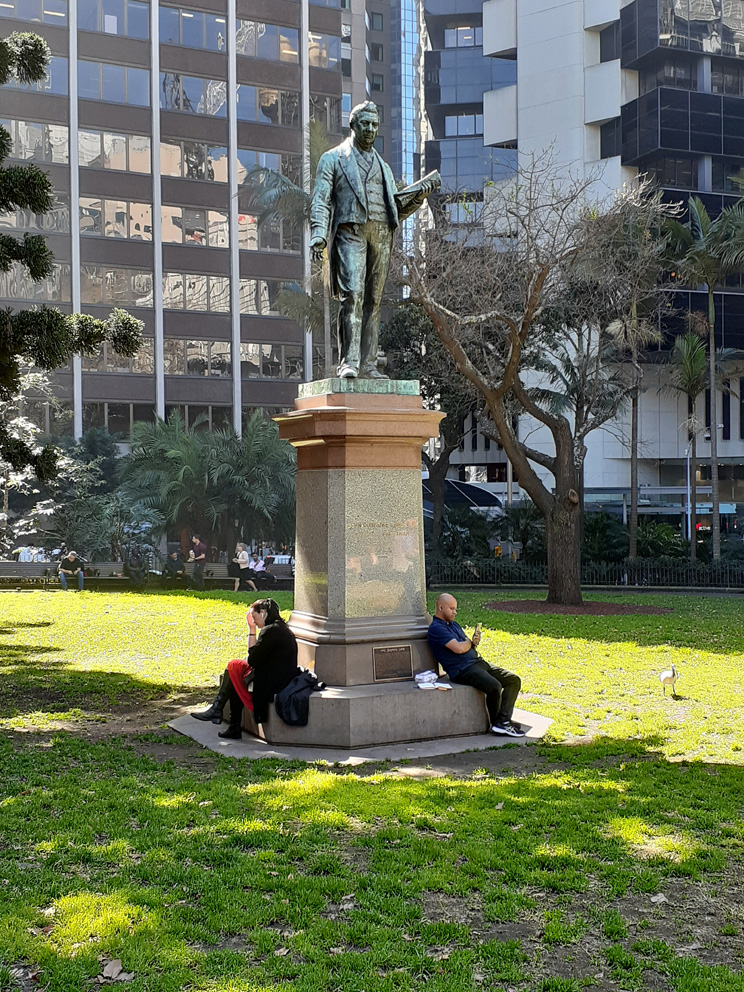 At the beginning of September 2019 I was in Sydney.  I caught a train to Wynyard Station and was walking north along York Street towards the Society of Genealogists in Kent Street.  As I didn’t have a lot of spare time before I needed to be there I wasn’t able to dawdle but spotted a couple of things on my map and on the way that I intended to have a good look at on my way back to Wynyard.

My map showed Wynyard Park and I passed a sign to the ‘John Dunmore Lang’ statue, then there was Lang Park – curiously not the location of Lang’s statue, and finally it was St Patrick’s Roman Catholic Church.

The latter was special – where my g-grandparents, George FUSSEN and Mary McNEIFF, were married in 1890.  I had been there about 30 years ago and it was definitely time for another visit.  George FUSSEN was French and he was married by the French priest Fr Augustine Ginisty.  At the time George and Mary stated their usual place of residence was Sydney and a few months later when their first child was born their residence was Woollahra in Sydney.  They may have chosen St Patrick’s because of the French priest or because of its reputation for priests were more compassionate in confession or both!  There is always a special feeling being in a place that was significant to your ancestors and this occasion was no different.

A little further down York Street on my return trip, was the Lang statue.

I was a tad surprised to see the John Dunmore Lang statue – in Geelong where I currently live, he was known for his immigration schemes.  The late Ian Wynd’s lifetime research resulted in A Thoroughly Protestant Emigration: the emigration activities of the Rev Dr J D Lang.  I wasn’t aware of his activities in Sydney that could possibly warrant such a large statue in a prominent position. From the plaque at the base of the statue I learnt about a totally different person.  The plaque read:

The Hon. R J Carr MP. Premier of New South Wales, unveiled this plaque as a bicentennial commemoration of the life and work of the Reverend Doctor John Dunmore Land, and to honour Lang’s contribution to Australia.  For fifty-five years Minister of the Scots Church, Sydney, Lang founded the Presbyterian Church in Australia.  He promoted schemes for skilled and educated immigrants.  He helped introduce higher education and supported a general school system.  He had a vision for Australia as an independent nation with a significant role in the Pacific region.  Lang respected the intelligence and culture of the Aboriginal people and he worked to remove the discriminatory poll tax from the Chinese population.  Lang was elected to the New South Wales Parliament on seven occasions with Wynyard Park the scene of his triumphs in the popular vote elections to the Legislative Assembly.  A fervent democrat, Lang helped establish responsible government in New South Wales, laid the foundation for a future federal structure by urging separation for Victoria and Queensland, and he was one of Australia’s pioneer republicans.

The inscription on the pedestal below the statue read:

It was almost as if I was reading about two different people but there is no question – it is the same Rev. John Dunmore Lang.