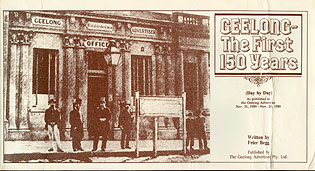 On behalf of all local and family history researchers in our region I’d like to say a huge Thank You to Peter BEGG who has retired as a full time journalist at the Geelong Advertiser.  Peter was responsible for the magnificent publication Geelong~The First 150 Years.  The book was the culmination of Peter’s daily column celebrating 150 years of the Geelong Advertiser.

This publication is fully indexed in the Geelong & District database and covers a fantastic range of topics.

There was a great article in today’s Addy by Danny Lannen titled ‘Home is where a journo’s heart is’. [Geelong Advertiser. Saturday 20 February 2016, p. 37.]

There was also a tweet from his peers – fare-welling and thanking Peter for his time at the Addy.

Now that Peter has so much spare time on his hands, I just hope he can remember and find the source of the photo of Anne Drysdale which appeared in the May 11 column – relating back to 1853.  The Bellarine Historical Society would love to find a copy of that photo for their Coriyule / Anne Drysdale / Caroline Newcomb display later this year!

Thank you Peter and all the best for the future.